×
Listings > Auto news > Classic Cars > The Awesome of 1980’s, Worst Cars and the Perfect then

The Awesome of 1980’s, Worst Cars and the Perfect then

The Awesome 1980s were a strange time for the automobile business as the industry transitioned from big rear-drive dinosaurs to smaller, trimmer, perfected fuel-injected front-drivers. Sure, we got some great cars in the 1980s—but we also got some truly terrible ones. Here we revisit some of the worst cars of the 1980s. 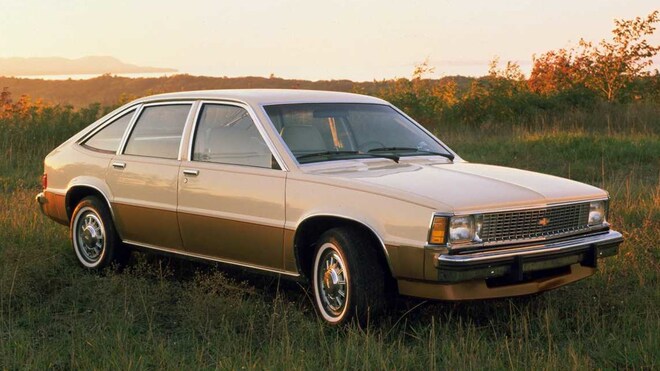 Then Fancy and the big thing on the road the Chevrolet Citation, Buick Skylark, Oldsmobile Omega and Pontiac Phoenix were meant to usher in a new era at GM, and they did—the era of Everything Is Really, Really Terrible. While Chrysler and Ford turned to their European divisions for guidance on how to do front-wheel-drive better, GM, which had been building the front-drive Cadillac Eldorado and Olds Toronado since the mid-’60s, must have figured it had all the experience it needed. Wrong!

The X-cars suffered every problem imaginable: Bad welds, failing transmissions, vibrating engines and shaky structures. But the biggest problem was the brakes—the rears would lock prematurely, leading to a spate of fatal crashes. GM stonewalled, the government sued, and the X-cars were crushed under an avalanche of bad publicity. In 1980 alone, over a million buyers became unwilling participants in the apocalypse. GM embarked on a crash improvement course, and many of the X-cars’ greasy bits went on to provide trouble-free service in the mid-size A-bodies (Chevrolet Celebrity, Olds Cutlass Ciera, Pontiac 6000, Buick Century) and the Pontiac Fiero. But the X-cars would go down as among the worst of the 80s, helping to initiate a slide in GM’s market share that continues to this day. 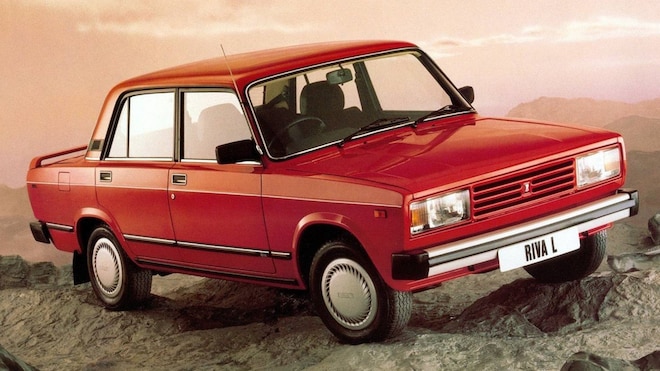 A Fiat design deemed too ancient and crappy even for the Italians, the Lada was built by a Soviet concern called Volzhsky Avtomobilny Zavod, which, we can only assume, is Russian for “Bureau of Self-Propelled Wretchedness”. It was the perfect car for a populace for whom making it home from the four-hour bread line without being interrogated by the KGB and exiled to Siberia constituted a good day. While this little Red Scare never made it to the United States, it came pretty darn close—AvtoVAZ marketed it not only in Europe, but in Canada. In the United Kingdom, where the £3,995 (about $9,300 at the time) Riva was the cheapest car you could buy, the importer had to put an average of £500 (about $1,150) worth of work into each car just to bring it up to British quality standards, a concept we didn’t even realize existed. In 2001, the Riva was crash-tested and scored zero stars. Amazingly, this wheeled torture chamber remained in production until 2012. 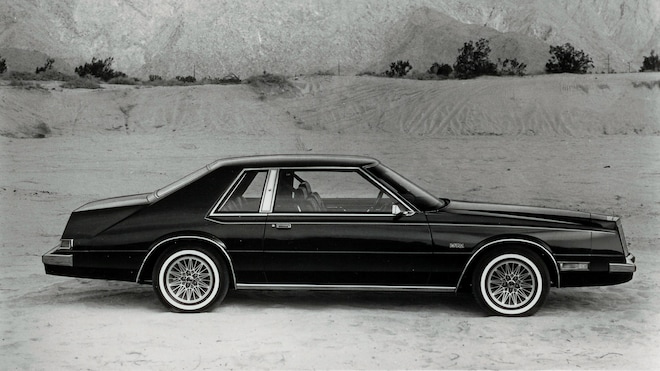 Chrysler billed the Imperial as “an electronic marvel,” but the real marvel was that even a company in as dire shape as Chrysler could find the wherewithal produce such a horrible car. The Imperial had a digital dashboard that didn’t work, an electronic fuel injection system that didn’t work, and a series of extra quality checks at the factory that definitely didn’t work. Underneath the stupid bustle-back styling, the Imperial was basically a Dodge Aspen with thicker sheetmetal, which added weight that further overwhelmed the emissions-choked 318 cid (5.2-liter) V-8. And what price misery? A cool $18,000, which was nearly $4,000 more than a Cadillac Coupe deVille. In three years of production, Chrysler convinced fewer than 11,000 hapless buyers to take one home. Lucky for Chrysler, Lido, and Ol’ Blue Eyes, the success of the K-car eclipsed the failure of this disgrace to the once-great Imperial name. 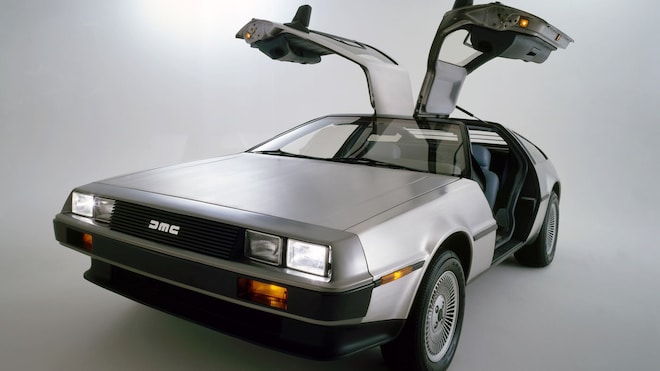 With its gullwing doors and stainless steel finish, the DeLorean DMC-12 captured the imagination of car fanatics even before Back to the Future granted it immortal fame—only those few unfortunate enough to buy one realized just how dreadful they were. The 3.9-liter V-6 produced a mere 130 hp, about a third of what it needed to deliver anything you could refer to as performance without snickering. Build quality was beyond dismal—the British government had sunk millions into the venture on the proviso that DeLorean build its factory in Northern Ireland, forgetting to mention that no one in that troubled area had the faintest whiff of a hint of a clue how to build a car. Early buyers paid thousands above the astronomical $25,000 (about $70,000 in today’s money) sticker price, but once the world figured out how awful the car really was, John Z. DeLorean found himself with thousands of cars he couldn’t sell. In 1982, with the U.K. refusing to throw any more money down the loo, a desperate DeLorean turned to a cocaine-trafficking deal for which he was arrested and later acquitted. DeLorean Motor Company shut down in 1982, and the last cars came to the States badged as 1983 models. 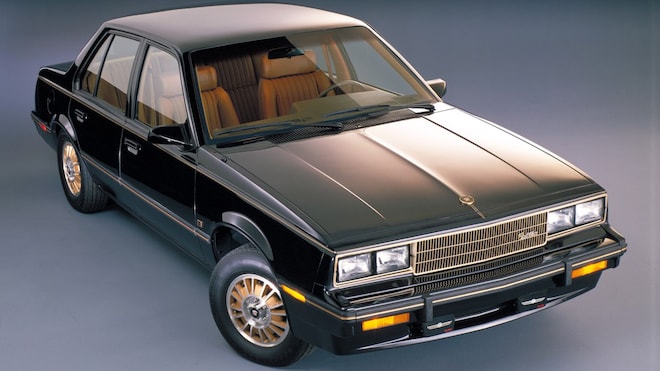 It’s a little hard to believe that Cadillac seriously thought it could take on the BMW 320i and Audi 4000 with a rebadged Chevrolet Cavalier, but … it did. Part of the problem was that the J-car was never intended to be a Cadillac. The Cimarron was a last-minute decision made four years after J development began, a response to dealers, buoyed by the success of the compact Seville, asking for something even smaller to take on the imports. There was no time to fit any engine other than the Cavalier’s anemic four-banger, and suspension engineers were given less than a week to sort out the Cimarron’s ride and handling. Car magazines put a brave face on this gilded runt, praising its tidy dimensions while ignoring what was obvious even to the least car-conscious citizen: Cadillacs should be big and opulent, not cheap, slow economy cars with overstuffed leather seats. Amazingly, Cadillac didn’t pull this horror show off the stage until 1988. The Cimarron didn’t singlehandedly destroy Cadillac’s image—the brand had a Gatling gun pointed at its own foot for several years—but it arguably did the most damage. 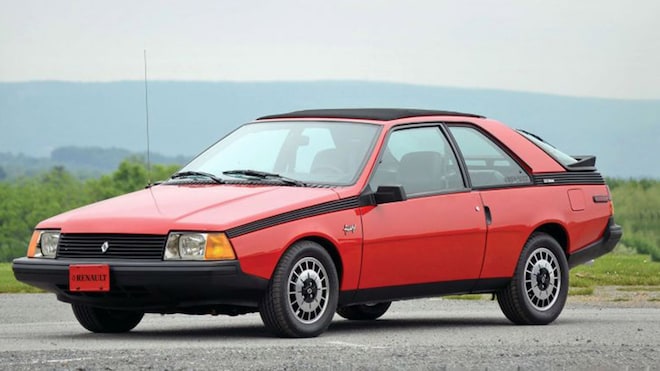 Renault’s partnership with American Motors Corporation had filled its corporate brain with delusions of adequacy, and in 1982 it brought the stylish Fuego (Spanish for “fire”) to America as its resident sports car. There was only one problem: Americans expect their sports cars to be sporty, and the Fuego’s soft springs, over-boosted steering, and easy-chair seats made it anything but. The base engine was comically slow, while the 107-hp turbo version was merely feeble, moseying to 60 mph in just over 10 seconds. Renault enlarged the base engine for ’84, but all that accomplished was to render the turbo pointless. All this played out against a background of abysmal build quality and scarce parts availability. Meanwhile, Americans had a choice of competent front-wheel-drive coupes from Germany and Japan, and even half-assed efforts like the Ford EXP and Dodge Omni 024 seemed like passable sports cars compared to the Fuego. Renault finally got the hint, and the Fuego burned out after 1985. The Arna was a joint venture between Alfa-Romeo and Nissan, for which its name was an acronym—and if you think the acronym is bad, you should experience the actual car. Based on a distant relative of the Nissan Sentra, the Arna’s powertrain, front suspension, and steering were designed by Alfa-Romeo. Promising, right? Unfortunately, the Arna’s handling was as boring as its witness-protection-program styling. Shoppers dismissed the Arna as a rebadged Nissan, but how wrong they were! The Arna embodied many of Alfa-Romeo’s best-known traits: It shed parts like dandruff, broke down with enthusiasm, and rusted at the speed of sound. Fiat rode to ailing Alfa’s rescue in 1987, and the very first thing it did was kill off the Arna. When Fiat says a car is too lousy to live, you know it’s one of the worst. 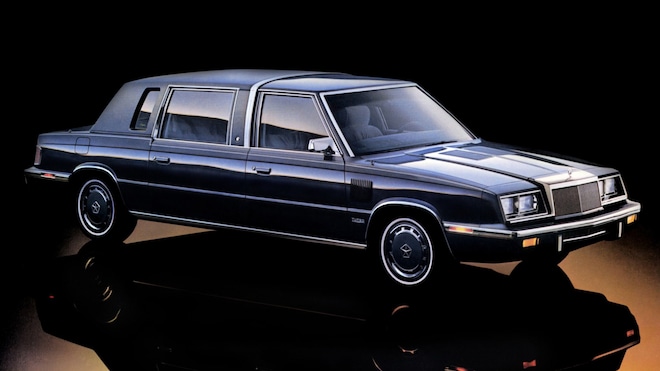 Heady with the success of saving Chrysler, Lee Iacocca and his merry men were convinced the K-Car could do anything—even masquerade as a limousine. So, they stretched the Chrysler LeBaron’s wheelbase and welded in more steel, because what its feeble 2.6-liter engine really needed was more weight to haul around. Chrysler made two versions, the Executive Sedan and the longer Executive Limousine, the latter able to seat seven people, provided six were willing to get out and help push it up hills.  Unfortunately for Chrysler, the economy was taking off like a rocket ship, Wall Street was making millionaires at the rate rabbits make rabbits, and no one wanted to be seen in a half-pint limousine! Renault’s partnership with AMC kept the American company afloat and gave the French company the beachhead it wanted in the States, but the real money was going to come when Renault could build cars at AMC’s Kenosha, Wisconsin factory. The Renault 9 was followed a year later by the 11, the cars aptly renamed Alliance and Encore. AMC’s build quality was marginally better than Renault’s, in the same sense that chronic arthritis is marginally better than chronic migraines. The cars were indifferently assembled and woefully underpowered, but they handled well, and the $5,595 price made them bargains compared to other European cars. But just as the money started rolling in, the economy picked up and Americans lost interest in small, affordable, badly built cars. Renault was drowning at home, and suddenly AMC felt like a pair of cement shoes. In 1987, Renault sold AMC to Chrysler, which quickly axed the little French cars and concentrated on turning the Jeep brand into a money-printing machine. The SUV craze was still in its primordial stage when Ford introduced the Bronco II, a half-size off-roader based on the new Ranger pickup. As with the Pinto, Ford knew it had a problem with the Bronco II even before sales began: It had an irksome tendency to go shiny-side-down. Ford charged onward into production, and the result was a predictable barrage of rollovers, injuries, deaths, and lawsuits. Ford contended that any vehicle could roll if driven badly enough, though the statistics made it appear that bad drivers were irresistibly attracted to the Bronco II. Its crash-and-death rate was so high that insurance giant Geico refused to insure it, and some have estimated that the Bronco II cost Ford nearly $2.5 billion in damage settlements. Ford axed it in 1990, and when the company developed a four-door version, it was renamed Explorer, a vehicle that would face its own rollover Firestone—er, sorry, firestorm—a few years later.