With dollar signs in its eyes and the precedent set for a successful big-money, hi-tech BMW coupe, BMW fixed its sights on Aston Martin’s and Mercedes-Benz’s top-dollar grand tourers with the initial design and conceptual development of the range-topping BMW 8 Series in 1981. In 1986, engineering and pre-production testing kicked off, and after burning through the equivalent of $900 million in developmental costs, the E31 BMW 8 Series made its full production debut at the 1989 Frankfurt auto show as the BMW 850i.

Immediately, buyers went buck wild. According to some reports, 5,000 orders were plunked down just eight days into the show; by the following summer, the nearly 12,000-unit annual production run was sold out through 1993. Some rabid Bimmer superfans were so smitten they were more than willing to pay well over the asking price—a common practice nowadays for supercars like Ferraris and GT-division Porsches, but almost unheard of at that time. 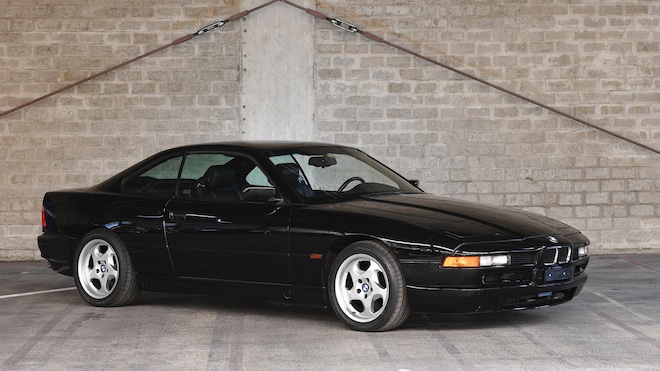 At launch, the 850i was available only with a 5.0-liter V-12. The 850i was only the second BMW to pack twelve cylinders, after the 1987-1994 E32 750i. The M70 V-12 was a contemporary powerhouse, offering 296 hp and 332 lb-ft of torque through either a five-speed manual or four-speed automatic transmission. The performance was impressive, with 0-60 mph arriving somewhere in the low six-second range and a top speed of 155 mph.

Visually, the E31 was (and still is) spectacular. Designer Klaus Kapitza aimed for the lowest drag coefficient the design and engineering team could muster, eventually cutting a low, lithe silhouette that sliced the air at needle-sharp 0.29 coefficient of drag. Not wanting to spoil that sublime profile, Kapitza cut the B-pillar from the design, leaving a large open area where usually there is bodywork, and instead fitted tight-sealing windows and seat-mounted seatbelts to compensate.

Soon after, the high-performance 850CSi arrived in 1992, now with the mighty S70B56 5.6-liter V-12 that spun out a wildly impressive (for the era) 375 hp and 406 lb-ft of torque. A new, stiffer suspension and sharper steering were fitted, along with a standard six-speed manual transmission. The 0-60 mph run dropped to the low-to-mid five-second range, and top speed jumped to 180 mph—but only if you removed the limiter. Otherwise, it remained limited to the same 155 mph Vmax. 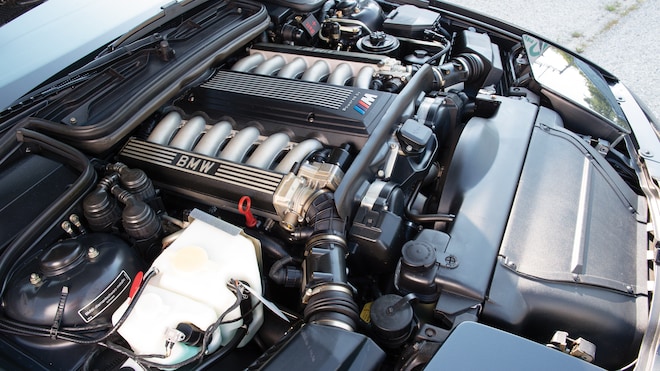 With a financial crisis wreaking havoc on the global economy by the late 1990s, the 8 Series struggled to recapture the same level of sales success it saw at its debut, eventually leaving production after the 1999 model year. After the inventory was cleared, only 30,621 8 Series of all configurations had left the factory.

What Could Have Been

It’s a shame the E31 petered out toward the end; struggling sales killed off a number of intriguing concepts. Along with a sensible cabriolet variant, a devastatingly cool M8 prototype never made it to production, despite entering the final stages of development. For decades, BMW denied the existence of such a prototype, only to acknowledge and reveal the mothballed M8 in 2010. We’re glad we got to see it eventually, but looking over the spec sheet stings something fierce. From the 6.1-liter DOHC V-12, a Ferrari-battling 550 hp and 368 lb-ft of torque slingshotted the M8 to a 198 mph top speed. Couple this to an M-spec suspension, brakes, six-speed manual transmission, and liberal use of early carbon fiber componentry, and the E31 M8 goes down as one of the greatest “what-ifs” of the car world. 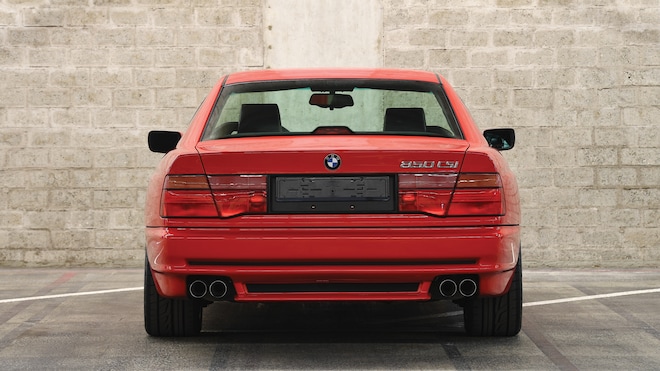 After the 8 Series left production in 1999, the E63 6 Series picked up the big-body BMW coupe mantle in 2003, though both financially, stylistically, and spiritually, the 6 Series was a follow-up to the earlier E24 6 Series. BMW wouldn’t produce a true E31 8 Series successor until the current G15-generation 8 Series.

It’s not as lithe stylish as the original E31, but modular architecture and drivetrains allow the fabled M8 badge to reach production, now in the form of both the BMW M8 and M8 Competition. In the M8 Competition, the 4.4-liter S63B44T4 twin-turbo V-8 puts out a tremendous 617 hp and 553 lb-ft of torque. Can’t spring for the $146,000 M8 Comp? Don’t worry, even the most asthmatic of the lineup—the turbocharged inline-six 840i—still has more power than the original V-12 E31 850i that debuted three decades ago.

In the annals of BMW history, the original E31 8 Series holds a place as one of the most beautiful and indisputably timeless designs ever to wear the roundel. Despite only moderate success toward the end of its life cycle, the E31 captured the imagination of many a BMW enthusiast, and the eventual revival of the vaunted nameplate was met with much praise.

Today, with the exception of the rare and highly sought-after 850CSi variant, the E31 hasn’t quite experienced the same level of explosive success enjoyed by older M-division cars. However, its place as the only V-12 coupe in BMWs long history portends well for its future.

Good news: If you’re not absolutely set on finding one of the rare 850CSi models, now is the time to buy a reasonably clean 8 Series before the rest of the market wakes up and realizes just how special these contemporaneously cutting-edge super-coupes are. Stick with the most common 850i (over 20,000 built), and you can expect to pay around $20,000 for a reasonably clean example. 840Cis worth your time go for between $10,000 and $18,000, but you’re way, way outta luck if you’re hoping to slide in a clean 850CSi for under $75,000. Most of the best condition examples claim a smidge over six-figures at auction, especially if it’s an ultra-desirable euro-spec model. 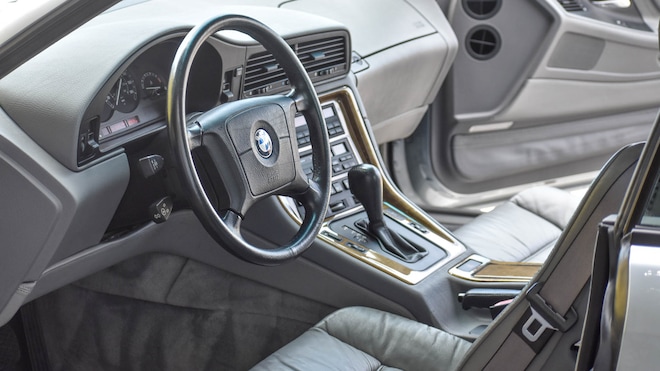 Buyer beware—no matter the engine or year, these are notoriously complex and maintenance-intensive cars. Most mechanical componentry is off-the-shelf BMW, but this is not going to be an easygoing ownership experience. The oily bits of the engines themselves are quite robust, but the associated electronic systems are outrageously expensive to fix. This was one of the first BMWs with throttle-by-wire, and the sizeable cluster of ECUs under that shapely front hood is prone to busting.

The trick here is to buy the cleanest you can afford and take care of any small issues that arise as quickly as possible. Look for obvious problems like fluid leaks, corrosion, and any undue smoking or dire driveline noises. As we will suggest to anyone for any car, investing in a pre-purchase inspection is one of the best ways to prevent headaches down the road.

Oh, you’re looking at a new 8 Series? Yeah, just buy or lease whatever you can afford and follow the dash prompts for oil changes. You should be good to go for tens of thousands of miles.

What is the BMW 8 Series

Strictly speaking, the original E31 BMW 8 Series was conceived as a coupe counterpart to the large and very much in-charge 7 Series executive sedan. Size-wise, the 8 Series was closer to a 5 Series coupe but packed much, much more tech and luxury features than the preceding 6 Series.

How fast is the BMW 8 Series?

As was the case with most German cars from this era, top speed was limited on all E31 8 Series to 155 mph, though with the limiter removed, the powerful 850CSi could attain 180 mph.

When did the 8 Series come out?

Following its debut at the 1989 Frankfurt auto show, the BMW 8 Series went into production for the 1990 model year.