When was the last time you thought about Isuzu? If you live in the U.S.A., it’s probably been quite a while since that Japanese automaker has crossed your mind; the last Isuzu passenger vehicle sold in America got its tags in 2009. Don’t worry, though—Isuzu is doing fine without us, as one of the largest suppliers of commercial diesel engines, trucks, and buses globally. Isuzu also still sells passenger trucks and SUVs in other markets.

Even when it was still selling cars here, Isuzu wasn’t exactly the most exciting or evocative automaker—at least, not toward the end of its U.S. presence. While other Japanese manufacturers like Toyota, Honda, Mazda, and Nissan made huge inroads in the 1970s, 1980s, and 1990s, Isuzu didn’t really start to pick up until the 1980s, and by then it had very strong competition from the aforementioned Japanese superstars, with little in the way of market share left to grab.

So, with a small portfolio of cars, trucks, and SUVs, Isuzu began to dream big—really, really big. With the Japanese economy the strongest it had ever been to that point, the Isuzu of the 1970s through the 1990s dreamed up some of the wildest concepts and most genuinely endearing sport compacts. But you might not know they ever existed if we didn’t drag them out of the annals of automotive Obscura. 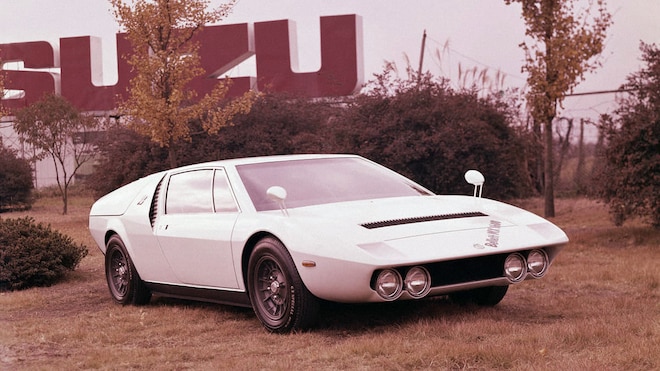 As quirky as things got in the 1970s and ‘80s, we’d be remiss if we didn’t mention the automaker’s success in the 1960s. Before General Motors barged in and pushed Isuzu’s small car aspirations onto the backburner (a common theme), the stylish and very European Isuzu Bellett compact was a hit domestically and abroad. For the enthusiast, the rare Bellett GT-R was produced in limited numbers.

At the same time, Isuzu was launching onto the international racing stage with a Group 7 (Can-Am) car and another racing prototype called the Bellett R6. This toe-in-the-water, along with heavy influence from the European market, inspired Isuzu to create a mid-engine supercar concept called the Bellett MX1600 for the 1969 Tokyo Motor Show, pictured above. If it reminds you of a Pantera, you’re not crazy. Legendary designer Tom Tjaarda was behind the MX1600, and went on to pen the aforementioned De Tomaso.

Power for the mid-engine Isuzu concept came from the 1.6-liter DOHC four-cylinder from the Bellett GT-R, so we’re sorry if your Isuzu V-12 supercar dreams were dashed, but don’t worry, that comes later. Yes, really.

Isuzu enthusiasts might not like this, but for the sake of brevity, we’re skipping over the majority of the 1970s. During that time, Isuzu produced the stylish but ultimately not-very-outlandish Florian sedan and the Giorgetto Giugiaro-designed 117 Coupe.

We’re more interested in what came after the 117 Coupe. In 1978, Isuzu commissioned Giugiaro to design the 117’s successor, resulting in the fascinatingly named Asso di Fiori (Ace of Clubs) concept that debuted at the 1979 Tokyo Motor Show. A big hit, the angular rear-wheel-drive hatchback sports car went into production under the Piazza badge overseas, and was known as the Impulse in the U.S. 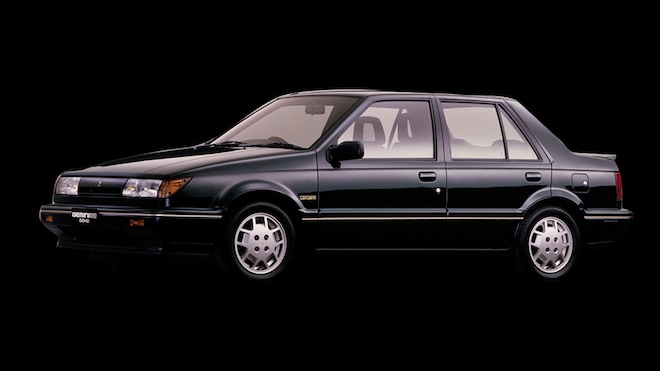 The Isuzu and Lotus Crossover Episode

Here’s where things get a little incredulous. To sharpen the Piazza/Impulse’s chassis, Isuzu turned to Lotus for help, accessed through GM’s connections to both automakers. After some developmental work, the new Piazza/Impulse Turbo received softer springs, stiffer shocks, and beefier sway bars, courtesy of the famed British sports car manufacturer. The later front-wheel-drive/all-wheel-drive second-gen Piazza/Impulse used a Lotus-tuned chassis across the board, and not just on the range-topping Turbo variant.

Soon, the strange Isuzu-Lotus partnership was in full swing. The compact Isuzu Gemini received an optional “ZZ” suspension package from Lotus for the second and third-generation cars, and Lotus even used Isuzu’s 4XE1 four-cylinder family in its front-wheel-drive Elan M100 roadster. 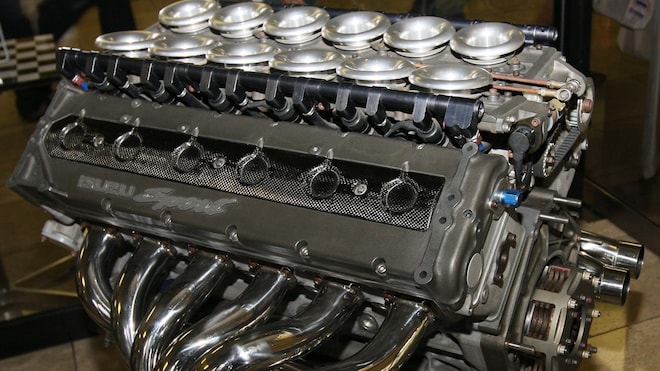 Flush with cash from Japan’s booming late-1980s bubble-era economy, a cluster of Isuzu engineers decided they wanted to try a hand at building a gas-powered V-12 engine as an engineering exercise. Notice how we specified gas-powered? By this point in time, Isuzu had already developed massive commercial-grade diesel V-12s that ranged between 14.9 liters and 22.8 liters for its New Power, 810, and Giga truck lines.

Developed in secret, with support from Isuzu management coming later, the resulting 3.5-liter P799WE V-12 aimed its sights at Formula 1, which had just recently made the transition from turbocharged drivetrains back to natural aspiration. Lotus’s F1 team struggled with the transition, especially after its unreliable and heavy Lamborghini V-12 proved uncompetitive.

So, the P799WE was shoehorned into the experimental Lotus 102C, a test version of the 102B race car. With output rumored to be close to the 750 hp mark, things looked promising, but in testing the 102C was six seconds off the leading Honda piloted by Ayrton Senna. Lotus decided not to move forward with the Isuzu V-12, but it didn’t matter since Isuzu management rightfully decided it wasn’t worth the enormous expense following the collapse of the aforementioned bubble.

Off the track, Isuzu briefly pursued a different kind of F1. As Gordon Murray laid the groundwork for his iconic McLaren F1 hypercar, he petitioned from the outset to have Honda build the F1’s V-12 to his exact specifications. After Honda turned down his request, Isuzu stepped in with its fresh F1-developed twelve-cylinder, but McLaren politely rejected the offer on the grounds it was looking for an automaker with genuine race pedigree. Eventually, BMW took the job, and the rest is history. 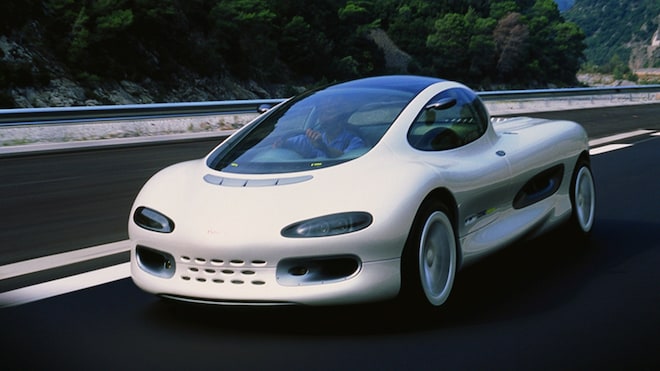 A Game of Concepts

The V-12s swan song arrived in one of Isuzu’s many wacky and weird concepts of the 1980s and 1990s. The 1991 Isuzu Como F1 is perhaps the craziest of them all: The melted-look, the V-12 hidden under the soap-bar body, and gullwing doors. Oh, and room for four.

How about the earlier 1989 Isuzu 4200R? Wearing the same droopy, soft-edged aesthetic, this supercar study incorporated the automaker’s experimental 4.2-liter Lotus-fettled DOHC V-8, capable of 350 hp. Aside from an intriguing powertrain, there was a host of cutting-edge tech, including active suspension, navigation, and of all things, a fax machine.

Before the 4200R, a series of concepts under the “COA” name showcased what Isuzu was potentially capable of. Of those, the final COA III is the most significant, sporting a strange tilt-open canopy to access the interior, along with the requisite all-wheel-drive, all-wheel steer, and small DOHC turbocharged four-cylinder.

Toward the mid-1990s, GM began to exert pressure over Isuzu’s passenger car offerings, pushing the Japanese automaker’s focus toward primarily trucks and SUVs and away from the scrappy compacts it worked so hard to establish.

Still, Isuzu proved it wasn’t one to be dull, even if it had to specialize in trucks and SUVs. While the popular but conventional Trooper and Rodeo filled American driveways, Isuzu pushed its 1993 VehiCROSS concept into production for the 1997 model year in Japan, eventually making it to our shores in 1999. One of the most visually striking SUVs ever produced, the funky character of the VehiCROSS never saw sales strong enough to justify a second generation.

After a string of trucks and SUVs on shared platforms with GM, Isuzu pulled out of the passenger vehicle market in the U.S. in 2009, leaving us with only its branch of commercial trucks. What a bummer! Isuzu will always be one of the “what ifs” of the auto industry, and bringing attention to the company’s weird and wacky past is the least we can do to keep the memory alive.

The post Isuzu’s History is Wilder Than You Think appeared first on Automobile Magazine.